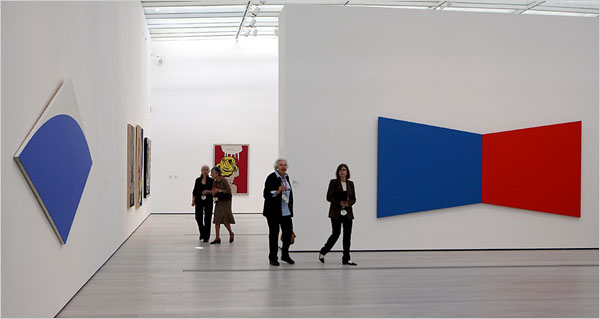 Generally speaking, I loathe every word the New York Times publishes about Los Angeles. But in Roberta Smith’s review of the Broad Contemporary Art Museum, she actually makes some interesting points about the blindingly white and almost entirely male collection on display, while simultaneously throwing a bone to the LA art scene. These paragraphs are particularly interesting…

“The ensemble conveys very little in the way of curatorial shape or imagination, or historical perspective. And the museum should be ashamed of the dominance of white male artists here. (Of the 29 artists, only Jean-Michel Basquiat is not white; only 4 are women.) It should also be embarrassed by the dominance of New York artists (21 out of 30) at a point when Los Angeles has one of the liveliest art scenes on the planet. How many museum exhibitions and collections look like this? Too many to count.

With the new Broad building, the museum, traditionally encyclopedic, announces an increased emphasis on contemporary art. (Its role model, the Metropolitan Museum of Art, has developed a similar fixation on the new.) In addition, it represents a healthy shift in the balance of power between Los Angeles and New York.”