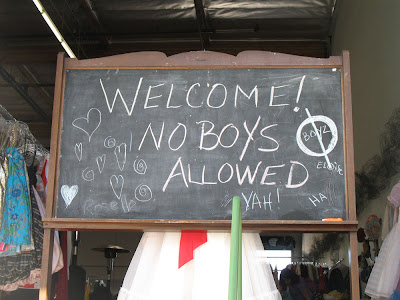 I first heard about Shareen Vintage from my friend Sherry Walsh and most recently from another friend Alexis Johnson. Sherry described it as a downtown warehouse filled with beautiful half naked women trying on the most amazing vintage dresses. Nicely put, Sherry and an “oh la la” right back at ya.

Shareen started out as a stand at the Melrose Trading Post on Fairfax. Due to her enormous success and the demand for these affordably priced vintage dresses ($1 to $200), she moved her operation to a warehouse east of downtown. It is now flocked by fashionistas.

Perhaps my favorite part of the whole experience was approaching the store only to be greeted by a chalkboard, spelling out the most important rule of Shareen: NO BOYS ALLOWED. And rightly so! There are no dressing rooms so all trying on happens right there in the middle of everything.

Moral of the story: don’t leave your knickers at home.